As the weather warms up in the spring and the snow melts, Colorado bursts into bloom, its turquoise lakes, and wildflowers bursting with color.

In addition to the vibrant wildflower bloom, the state’s mountains, meadows, and grasslands are alive with the fluttering of 45 different species of butterflies.

There are many opportunities to witness these wing-adorned beauties fluttering about from spring through early October, whether hiking through wildflower meadows, woodlands, or waterways.

Here are 10 butterflies that you might probably find when exploring Colorado.

One of the world’s most well-known and extensively researched butterfly species is the Monarch. Monarch wings are orange with black lines and white dots bordering them.

The Monarch is well-known for its breathtaking seasonal migration, particularly in Colorado. They normally travel north between March and June once the winter season has ended.

As they migrate through Colorado, there is something unique about them; even though the Rocky Mountains of the Continental Divide divide the Western and Eastern populations, both flock to Colorado and put on a spectacular display for locals.

Most of these butterflies are white, with gray spots near the wingtips. In the middle of the forewing, males have one black mark, while females have two.

The Weidmeyer’s Admiral butterfly has white bands and blocks on both wings, with mostly black wings overall. From early June to early September, you can find this butterfly in the woods along mountain streams and other mountain settings. By butterfly standards, they are a big size.

The contrasting black and white markings on the wings of both sexes can be used to distinguish them. In Colorado, this species is typically visible from June through early September.

Eastern Colorado seems to have a higher density of two-tailed swallowtails. Their habitat may include urban and suburban locations and rural open spaces, including fields, gardens, marshes, hilltops, and roadside locations.

These butterflies have wings that may spread up to five inches, and most of their stripes are black and yellow. Colorado is home to two-tailed swallowtails, most frequently observed where ash trees are grown.

The Hoary Comma is a dark reddish-orange and brown butterfly with black spots and bars. A row of yellow dots marks the wings’ jagged edges. The underside of the wings has a gray coloration overall, with darker areas that resemble tree bark.

The Hoary Comma is typically found near streams, prairies, and meadows in conifer or mixed woodlands.

On the Common Buckeye, there are any number of “eyes.” Both the forewings and the hindwings have spots that mimic eyeballs. Two orange streaks and two sizable black eyespots are present on the forewing. The top of the two eyespots on the hindwing is a crescent-shaped shade of magenta.

Although this species can be found in Colorado from May to October, it cannot survive the harsh winters and does not have the ability to reproduce there. However, adults frequently move into Colorado in the late summer and early fall.

The Painted Lady is one of the most frequently sighted and recognizable butterflies after the Monarch. In fact, all of the continents of America—aside from Antarctica—are home to them. But because they are migratory, they depart Colorado in the winter when the temperatures are too low for them to survive.

The wings have dark eyespot markings and are primarily orange and black. This butterfly is most common in North America, Africa, Central America, Asia, and Europe.

The forewings of the medium-sized Rocky Mountain Parnassian butterfly are black and gray with white or off-white accents.

The ideal time of year to locate them is from the end of May to early September in forests, plains, or rocky terrains where Sedum plants are present. They are about two inches long and have red or orange patches on the hindwing.

The state insect of Colorado, the Colorado Hairstreak, can be seen in the foothills and canyons of the region from late June to August. Adults range in size from 1.25 to 1.5 inches in length, consuming tree sap as opposed to flowers.

Their tops typically have blue or purplish tints with orange dots and small white veins running through them, while their bottom sides are typically gray.

Since 1996, this kind of butterfly has been recognized as the state insect of Colorado. It is typically found in hills and valleys between 6500 and 9000 feet in elevation. 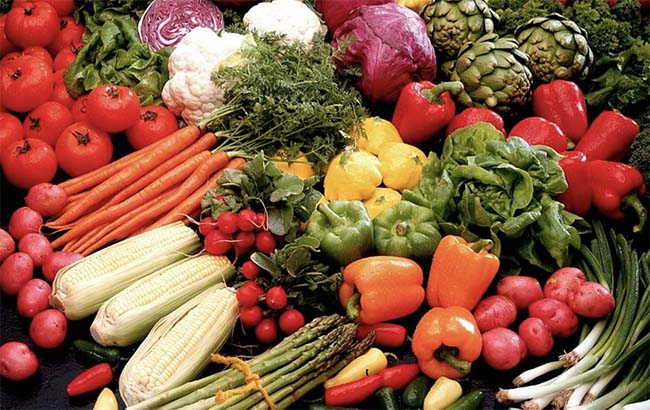 10 Best Fruits And Vegetables To Grow In Western Colorado

Another of the best fruits that you can grow in Colorado is tomatoes. Whether their the smallest type of cherry tomato to the largest type of beefsteak tomato, all types of tomatoes will grow amazingly in Colorado. This is because Colorado gets a bountiful amount of sunlight that tomatoes love to grow in.

An amazing vegetable that you can grow in Colorado is broccoli. This hearty green vegetable can withstand the tough Colorado winters so it can still grow to the best of its abilities.

Nothing beats a well-grown beet! Beets can grow well in Colorado as this state gets a suitable amount of water to ensure that beets stay plump, juicy, and well-hydrated.

A great vegetable that you can grow in Colorado is bok choy. Although bok choy originates from certain East Asian countries, the amount of sun that Colorado gets mimics these east Asian countries’ average sunlight as well. This in turn creates the ideal environment in which to grow this leafy vegetable in.

Although there are plenty of rabbits that hop around this state, Colorado is still a great state to grow carrots in. The warm summers that occur in Colorado give credit to the ability to grow carrots.

Much like its green brother broccoli, which has been listed above previously in this article, the pristine white cauliflower is another vegetable that grows well in Colorado. Although it may come in a different color, the sturdy cauliflower can withstand the cold Colorado winters as well.

Craving something sweet while in Colorado? If so, try growing your strawberries! Strawberries grow wonderfully in Colorado due to the lack of pests that damage crops in that state.

Radishes are a vegetable that grows quickly and in large amounts in Colorado. Even though Colorado might not be the largest state in the United States of America, this makes radishes a cute and small addition to any garden in Colorado. 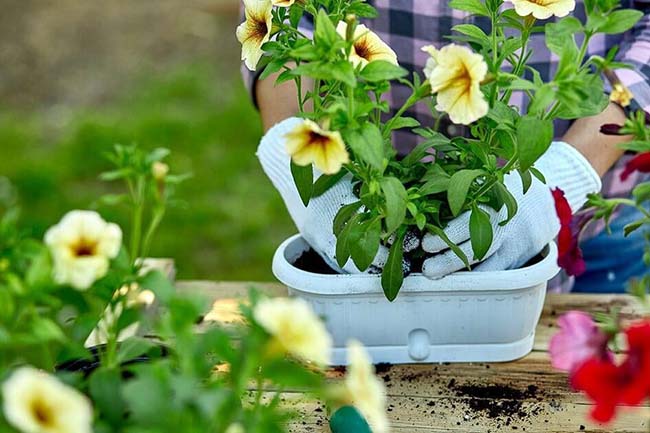 With several beautiful flowers growing well in Colorado, choosing the best varieties to grow can be a challenge. You want the best flowers possible and ones that work well in the Colorado climate.

If you enjoy gardening, then you want as many flowers as possible. But remember, some flowers are prone to pests, others require extensive care, and there are those that are easy to grow.

Petunias are an excellent choice flower to grow in Colorado. It’s a simple flower choice that grows all year. You can grow it in your garden, in hanging baskets, or in window boxes.

The flower thrives really well in the heat but can bloom from early November. As the weather gets hooters, the blooms become more. But be on the lookout for rabbits and chipmunks that eat the flowers.

If you want some ornamental flowers, then daises make a great choice. You can choose from the three varieties of Africa, Shasta, and English. It’s one of the most beautiful flowers that bloom year after year with little maintenance.

Dais is a perennial plant with bulbs planted in fall and the actual plant in Spring. The flowers are ideal for Colorado thriving with increased temperatures.

What’s more, the pungent flavor of the flowers can deter pests like deer and rabbits.

Commonly known as rock trumpet, Mandevilla is a great choice of flower to grow in Colorado. This is a genius tropical and subtropical that will do well in Colorado. It’s a USDA hardy in zone 9 flower.

When temperatures hit below 45 degrees, you want to consider bringing it indoors. But that should not be an issue as temperatures are usually high in Colorado.

It’s a showy plant with trumpet-like flowers making it a perfect choice for your Colorado garden. It’s a flower that likes the sun a lot more than the shade.

This is one of the easiest flowers to grow in the hot Colorado temperatures. The plant just grows without any fertilizer. You can plant it in any soil without weeding it.

There are three varieties of Dahlia to consider. You can choose the Bishop, Pinnata, or the imperialis. However, the flowers are prone to common pests like rabbits, squirrels, deer, and chipmunks that eat the bulbs.

Zinnias are beautiful flowers and a great addition to your Colorado garden. They are a few of the spring flowers. You can plant them early in the summer without any issues. They can bloom and grow throughout the hot summer temperatures.

The plant is quite easy to grow from the seed. It doesn’t require much light and water to grow. Additionally, the flower grows easily without much care. But Zinnia grows best in containers, raised garden beds, and boxes.

Tulips are a popular choice to grow in Colorado. You can choose different varieties like a single, double, triumph, and fringed. These are among the most beautiful flowers on the list to consider planting.

They bloom in the Spring and come in different shades of yellow, pink, purple, black, white, red, and orange. The flowers are perfect for any yard and will add much-needed color.

They grow almost everywhere, from raised garden beds, boxes, containers, and even in poor soil.

For an extended flower season, marigolds are a great choice. They are perfected and suited for the Colorado climate. You can plant them from early Spring or late frost and expect flowers throughout the summer.

Marigolds can bloom for 6-8 months a year, making them ideal for the sunny Colorado weather.

Daffodils are quite easy to maintain and can grow well in the harsh Colorado climate. You can have more flowers blooming without even pruning them. It’s one of the few flowers that can thrive through summer and winter.

But they tend to be hardier, surviving long periods of cold, heat, and garden pests.

Yes, lilies are also great flowers to grow in Colorado. There are three varieties of common, dwarf, and yellow lilies to grow.

Lastly, you can choose the black-eyed Susan, which does very well in dry areas. While the plant might not bloom so much, you can expect to thrive in the harshest weather.

This is the perfect flower to grow in any garden in Colorado. The plant does exceptionally well in compact and mulch soils. You can be sure of all summer blooms with this plant.

Not every flower can survive in Colorado. You need flowers that adapt to heat and dry conditions. The flowers in the list can thrive in Colorado with little care and maintenance. Go ahead and choose a few to plant in your garden.